The nasolabial cyst (NC) is an uncommon clinical entity and is generally unilateral. It is benign in nature and is embryonic in origin and only one case with malignancy has been reported. It is located in the nasolabial folds. Most of time it is an asymptomatic deformity of face and rarely can result in nasal obstruction if it is bilateral. Its diagnosis is clinical and treatment is surgical excision. A 16 years brown female patient presented with bulging in left nasolabial region. She was treated with transnasal endoscopic marsupialization (TEM) surgery.

This embryonic, non-odontogenic, asymptomatic cyst was described first by ZUCKERKANDL in 1882.1 The nasoalveolar or nasolabial cyst (NC) is a rare benign lesion which is located in nasolabial folds at anteroinferior of the piriform rim of nasal cavity comprising approximately 0.6% of all jaw cysts.2 Mostly it is unilateral (90% of the cases) and in remaining 10% cases it can be bilateral.3 It mainly affects black race female between the 4th and 5th decades of life. The most suitable name is nasolabial cyst which was coined by Rao.4 Although other synonymous names are nasoalveolar cyst, KLESTADT cyst, nasal wing cyst and congenital mucoid cyst of the nasal edge. We present a 16 years female with NC which is a rare benign cystic facial clinical entity.

A 16-year-old girl presented with swelling and elevation of the left nasolabial region. Clinically, there was a flattened upper lip with blurry nasolabialis sulcus. On palpation, a soft, cystic mass was palpable. It was extending from the buccal area up to the floor of the nose. The lesion measured about 20 × 15 mm. Patient complained epiphora due to pressure on nasolacrimal duct. Computerized tomography (CT) face showed an ovoid, well-circumscribed, extra-bony lesion lateral to the piriform aperture at the alar base. A clinical diagnosis of nasolabial cyst was made (Figure 1).

Transnasal Endoscopic marsupialization (TEM) of cyst was done. Under endoscopic guidance, an incision was made along the anterior border of the protruding cyst. The roof of the cyst wall and the nasal mucosa above it were excised. The opening of the cyst was widely widened and the cyst mucosal lining was dissected and excised completely. Meanwhile, the edges of the nasal mucosa and the cyst lining were trimmed. Loose nasal packing was done. The postoperative course was uneventful and there was no lesion recurrence up to three months of follow-up. 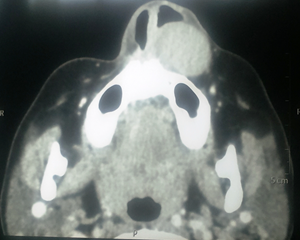 NC is a rare clinical entity and its incidence is about of 0.7% of all maxillofacial cysts and 2.5% of non-odontogenic cysts. In one study, the prevalence of NC was 0.29% (8 cases) in relation to the overall sample and 2.43% among all cysts. Commonly females in 4th and 5th decades and of East-Asian origin are affected.2 Male to female incidence ratios ranges from 2.7:1 to 3.7:1.5 The duration of evolution ranged from six to 18 months.6 Exposure to trauma accelerates the formation of the cyst.7 In 90% cases cysts are unilateral (as shown in our case) and can rarely present as bilateral cyst.1, 3 Vasconcelos et al. 8 report only one bilateral case (6.6%) among 15 NC in total. The same range is reported by Yuen et al.9

In spite of developmental in origin, all patients were in the 4th and 5th decade in chao et al.10 series of 23 patients, in Zahirrudin et al.11 series mean age was 43.2 years, in Yuen et al.9 series of 18 patients the mean age was 41 years, whereas Abou-Elhamd12 reported a case from Saudi Arabia of 38 years old while Jihan A. Al Maddah 5 reported a 36 years old patient. Our patient was 16 years old girl. The cysts can affect at any age but are extremely rare in patients younger than 10 year.

It is a non-odontogenic, embryogenic cyst with unclear theory of origin.6 There are two suggested theories relating to its origin. The first theory as Klestadt in 1913 suggested that after the fusion of maxillary and nasal (median and lateral) process, epithelial tissue gets entrapped and may result in origin of NC.13 According to this theory, the NC is a fissural or inclusion cyst. However, Klestadt’s theory is not sufficiently documented. According to the second theory, which was proposed by Bruggermann in 1920 14 the NC originate from embryologic remnants of the nasolacrimal duct as cavity of NC is lined by the pseudostratified columnar epithelium which also lines the nasolacrimal duct. So, this theory is histologically supported. This theory may need some revision, due to the finding of apocrine secretion along the surface of the nasolabial cyst.15 Thus investigations and further revisions may be required due to these doubts.16

On clinical examination, mostly there is a soft, cystic, painless, round to oval, fluctuant swelling under the medial end of the nasolabial fold. Usually, the cyst is located underneath the alanasi and extends laterally into the cheek, medially into the floor of the nasal cavity, and anteriorly into the lip and mucobuccal vestibule. The lesion is best examined by simultaneous bimanual palpation from the labial sulcus and the nasal floor, respectively. If lacrimal drainage is obstructed by the cyst, concomitant dacryocystitis and/or symptomatic epiphora (watery eye) may develop (as in our case) which is mostly common with bilateral cysts. Usually NC does not cause any displacement of the teeth. However, few cases have been reported.15, 17

In 50% cases, cyst may get infected.2 Due to cyst infection, the cyst can burst open into the oral cavity and /or to the nasal vestibule.1 If cyst gets infected it has to be differentiated from dentoalveolar abscess and it can be easily done by palpating the affected tooth. Apart from the periapical abscess, the differential diagnosis should include periodontal abscess, infected dentigerous cyst and nasolabial furuncle. If there is no history of trauma, then traumatic causes of cyst can be ruled out. Similarly, with the help of history and histopathological features, non-odontogenic origin cysts, such as epidermal cyst can be differentiated from NC. NC should be differentiated from Globulomaxillary and nasopalatine duct cysts; however, both of these are intraosseous lesions.15

Lesions that mimic the same clinical appearance when located in the upper lip include tumors of oral squamous epithelium, salivary gland origin (such as pleomorphic adenoma, canalicular adenoma, mucopeidermoid carcinoma, adenoid cystic carcinoma and polymorphous low-grade adenocarcinoma) as well as those from other soft tissues as muscles (leiomyoma), neural (Schwannoma), vascular (hemangioma), should be differentiated from NC.18 Benign NC does not perforate alveolar bone which is quiet common with malignant tumors. Biopsy and histological examination should be done for final diagnosis. Marcoviceanu et al. while describing a rare case of bilateral NC involvement included Melkerson – Rosenthal syndrome (MRS) in differential diagnosis.19

As NC is limited to soft tissues only and does not involve bone, plain periapical or occlusal X-Ray films are of little value. A subtle radiolucent halo may be seen in the area of the maxillary incisor apices.20 Computerized Tomography (CT) is considered essential for the presurgical estimation of lesion extent and limitation. On an axial CT scan, a nasolabial cyst will appear as an ovoid, well-circumscribed, extra-bony lesion lateral to the piriform aperture at the alar base.20, 21, 22 In addition to CT, Magnetic Resonance Imaging (MRI) is also helpful.21 In the past when CT was not available, to determine the exact boundaries of cyst, X-Rays were taken after injecting a contrast solution in the cyst. But injection can result in infection.23

Histopathologically cyst is lined with various types of epithelial tissue ranging from stratified squamous, pseudostratified columnar, cuboid to ciliated epithelium. Epithelial cells is associated with numerous goblet cells with mucus filled cytoplasm.17 The cyst wall is undistinguishable layer of connective tissue and the supporting connective tissue may include adjacent skeletal muscles, nerve bundles, vascular tissue, cartilage or minor mucous glands.3 Most often, the contents of the cyst consist of thin mucoid or straw-colored serous fluid, but when secondarily infected, purulent material can dominate.20 Electron microscopy reveals structure finding similar to lacrimal duct system which is made up of cuboidal basal layer and columnal luminal cells with goblet (mucous) cells. Yet, immunohistological examination may be useful.2 Only in one case carcinoma of nasolabial cyst has been reported in literature.24 Final diagnosis of the lesion can be made by clinical, radiological and histopathological examination.

Intraoral sublabial surgical excision is treatment of choice.9, 18, 22, 25 The surgical enucleation of the NC is essential to get tissue for histopathological examination and final diagnosis and addition advantage is no recurrence. Enucleation can be performed with local or general anesthesia. Denker incision (intra-oral incision, sublabial next to the incisive fossa) is ideal for total surgical excision. Laceration of mucosa of nasal floor should be avoided. Rarely, if there is the perforation of the floor of the nose then it can be sutured perfectly. Other methods of treatment are needle aspiration, sclerosing agent, incision and drainage, cautery and marsupialization. There is high chance of recurrence with these procedures.9

Recently, endoscopic transnasal marsupialization (TEM) is being used for treatment of NC. With the help of nasoendoscope, cyst roof is excised and mucous is sucked and after complete cyst marsupialization, an air-containing sinus develops in floor of nose. Su et al.26 primarily applied TEM in 16 patients. Recurrence was in one case in a period in-between 16 months follow up. Chao et al.11 treated 34 patients of NC with TEM technique and reported no recurrence.

Endoscopic approach is simple, takes less operative time and there is minimum blood loss. It is cost effective compared to sublabial approach because hospitalization is short, shorter duration of surgery and significantly lower incidence of postoperative complications such as facial swelling, numbness, andtoothache.10, 27 In the present case endoscopic approach was used to excise the cyst with widened cyst incision to prevent recurrence. Postoperative period was uneventful, and no recurrence for 3 months follows up.

TEM is treatment of choice in patients who are not medically fit for extensive surgery. TEM is also useful for recurrent NC.29 Recurrence of the cyst is rare and the prognosis is very good.30

The initial diagnosis and treatment is usually made in early stages because the lesion causes cosmetic problems. The diagnosis of the lesion can be made clinically, radiologically and through biopsy. Endoscopic approach with the use of debridor is a simple, cost effective, with almost no postoperative complications. With the use of angled telescopes complete excision is possible.