Synovial sarcoma is a rare and aggressive high-grade neoplasm with poor prognosis. It is usually encountered in the lower extremities of young adults; only a few cases have been reported in the head and neck region. We report the fourth case of synovial sarcoma of the nasopharynx, treated with neoadjuvant chemotherapy, complete surgical excision and adjuvant radiation with extensive review of literature.

Synovial sarcoma is a rare malignant tumor that derives from a mesenchymal precursor stem cell that is unrelated to mature synovial tissue. It is an aggressive high-grade neoplasm with poor prognosis. It accounts for about 10% of all soft tissue sarcomas and the most common location is the lower extremities. Around 10% of them occur in the head and neck.1, 2 The nasopharynx is an unusual site for this tumor. Owing to the paucity of cases of synovial sarcoma in the nasopharynx, information regarding appropriate therapy for this tumor is limited. We report the fourth case of a synovial sarcoma arising from the nasopharynx along with a review of the available literature. 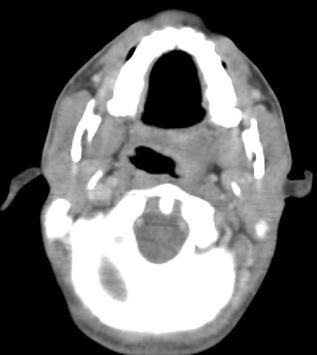 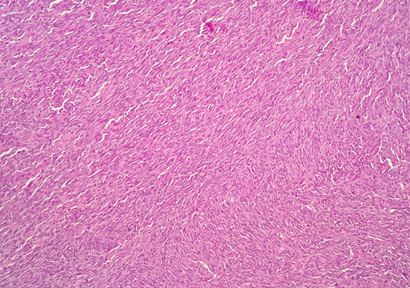 FIG. 2(a): Spindle cells with hyperchromatic nuclei arranged in fascicles and in interlacing pattern. 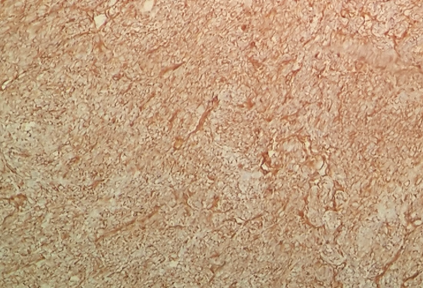 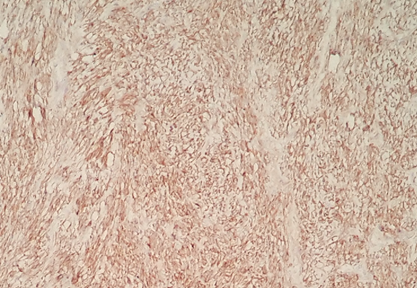 Head and neck synovial sarcoma presents both diagnostic and treatment challenges because of the limitations of knowledge and experience for this neoplasm. Median age of occurrence is in the third decade with a male preponderance of 3:2.3 Of these, synovial sarcomas of the nasopharynx are an extremely rare entity. Only three previous cases arising in the nasopharynx have been described in the literature.4, 5, 6

There are two forms of synovial sarcoma; the biphasic and monophasic. The biphasic type is the classic type that contains epithelial and spindle-cell components in various proportions, whereas the monophasic fibrous type contains only spindle cells. The t(X;18) translocation is a specific marker of synovial sarcomas. SYT-SSX1, SYT-SSX2, or the rarest SYT-SSX4 gene fusion product is derived from t(x;18) (p11.2;q11.2) and currently considered as a tumor-specific genetic hallmark because it is present in more than 95% of cases.5, 7 No visible rearrangement of chromosome bands is seen in a small proportion of synovial sarcomas.8

The primary treatment of synovial sarcoma is a wide surgical excision to obtain tumor-free margins. However, this cannot always be accomplished in nasopharyngeal cases because of the proximity of the tumor to vital structures.5 Tumors tend to spread beyond their visible and palpable limits.9 Most authors report that patients treated with surgery and adjuvant radiotherapy had higher survival and lower recurrence rates than did those treated with surgery alone.3 Also the overall value of the postoperative RT in soft tissue sarcomas has been found to be maximal in synovial sarcoma of the head and neck.10 Lung is the most common site of metastases (>90%).11 The value of chemotherapy in enhancing disease-free survival has not been firmly established. Lenoir et al.12, reported a dramatic regression in tumor size in a 15-month-old patient with a retropharyngeal synovial sarcoma after initial treatment with a combination of Ifosfamide, Vincristine, and Actinomycin D. Post-operative chemotherapy has also been advocated for prevention/delay of distant metastases although its role remains to be established.

Favorable prognostic indicators include an early diagnosis, small tumor size (<5 cm), younger age (<20 yr), and a wide surgical excision.13, 14, 15 Of these, tumor size is the single most important prognostic determinant, as tumors of >10 cm in diameter are associated with a poor prognosis.16 DNA ploidy may also be an important prognostic factor, with aneuploid tumors reported to diminish survival.17 Extensive osteoid and bone formation in synovial sarcomas was found to be associated with a favorable prognosis.18