Purpose: The purpose of this study is to investigate the dose-volume variations of planning target volume (PTV) and organs-at-risk (OARs) in prostate volumetric modulated arc therapy (VMAT) when varying collimator angle. The collimator angle has the largest impact and is worth considering, so, its awareness is essential for a planner to produce an optimal prostate VMAT plan in a reasonable time frame.

Methods: Single-arc VMAT plans at different collimator angles (0o, 15o, 30o, 45o, 60o, 75o and 90o) were created systematically using a Harold heterogeneous pelvis phantom. The conformity index (CI), homogeneity index (HI), gradient index (GI), machine monitor units (MUs), dose-volume histogram and mean and maximum dose of the PTV were calculated and analyzed. On the other hand, the dose-volume histogram and mean and maximum doses of the OARs such as the bladder, rectum and femoral heads for different collimator angles were determined from the plans.

Conclusion: Our study indicates that the dosimetric results provide support and guidance to allow the clinical radiation physicists to make careful decisions in implementing suitable collimator angles to improve the PTV coverage and OARs sparing in prostate VMAT.

Volumetric modulated arc therapy (VMAT) has become a standard delivery option in the field of prostate radiotherapy, due to its shortened delivery time and the smaller monitor units (MUs), as compare to step-and-shoot intensity modulated radiotherapy (IMRT).1-6 Patient dosimetry between prostate VMAT and IMRT has been extensively studied, which reveals that prostate VMAT can produce comparable or even improved target coverage and normal tissue (bladder, rectum and femoral heads) sparing.7-11

Until the availability of the Elekta linear accelerator VMAT in 200820, the only commercially available treatment planning system (TPS) was ERGO++ (3D Line Medical Systems/ Elekta Ltd, Crawley, UK), which needed an initial definition of sub-arcs and had manual version of the multileaf collimator (MLC) before automatic weight optimization and was not considered a full inverse planning system.11, 21, 22 In December 2009, two manufacturers introduced a new system of VMAT delivery that employed a VMAT treatment planning tool, implemented in Oncentra with Master-plan v3.3 (Nucletron BV, Veenendal, The Netherlands) with VMAT application on a Synergy linac (Elekta Ltd, Crawley, UK). Initially, the Synergy linac was used for a limited number of patients.8, 23

Multileaf collimators (MLC) are the best tool for beam shaping, and an important way to minimize the absorbed dose to healthy tissue and critical organs. They have moveable leaves arranged in pairs that can block a certain part of beam. Owing to its ability to control leaf position and with a large number of controlled leaves, it can be used to shape any desired field.27 Its manufacturers have established the necessary mechanisms for precision, control and reliability, together with reduction of leakage and transmission of radiation between and through the leaves. Moreover, it provides precise dose delivery to any part or the treated volume, accurately.28 Otto has stated3 and later on approved29 that a 45o collimator angle is feasible dosimetrically in most cases. While, Bortfield et al.29 found that the superiority of the above collimator angle (45o) was ambiguous. Furthermore, Bortfield and Webb did their work with a 0o collimator angle for a 2D model.30

Planning schemes
This study was established in order to compare dose distribution among different collimator angles (0o, 15o, 30o, 45o, 60o, 75o and 90o) focusing on the PTV and OARs. For each change of collimator angle, a new plan was re-optimized for that angle. The prescription dose was 78 Gy per 39 fractions. The treatment plan was not changed for each angle, only repeated by changing the collimator angles. The prostate Harold phantom developed by Chiarot et al.33 was used for this study. Computed tomography (CT) images (2 mm slice thickness and slice interval) were taken from the Toshiba scanner (Aquilion ONE TSX-301A; Toshiba medical systems, USA) containing 512 × 512 pixels in each slice. The Harold phantom was irradiated by a 120 kV photon beam with 300 mA current perpendicular to the phantom surface. After the CT simulation, digital imaging and communication in medicine (DICOM) CT images were transferred to the Pinnacle treatment planning system (TPS) for contouring and planning preparation.

The rectum, bladder, PTV, and femoral heads were contoured on the TPS. The whole prostate was assigned as gross tumor volume (GTV). The PTV was drawn by expanding 1 cm around the CTV in all directions uniformly except in the posterior direction, where an expansion of 0.7 mm was performed for a total contoured volume of 85.89 cm3. The bladder, rectum, and femoral heads have contoured volumes of 59.83 cm3, 36.26 cm3 and 166 cm3, respectively.

VMAT plan and treatment delivery
For planning the data, a Synergy S® linear accelerator with energy of 6 MV, equipped with beam modulator head, an iViewGT electronic portal imaging device, and on board cone beam CT XVI was used for VMAT delivery. There were no moveable jaws and the maximum field size was 16 cm × 21 cm. Maximum variable dose rate for each VMAT plan was 600MU/min and the gantry was rotated from 180 to 179.9 in the clockwise direction with 91 control points.

Smart-arc prostate VMAT plans were generated on Pinnacle (Philips, Version 9.2.0, Fitchburg, WI, U.S.A) with ACQSim3TM and were optimized with the direct machine parameter optimization (DMPO) algorithm. The isocenter was positioned at the center of the CTV and plans were set up in 39 fractions for 78 Gy minimum doses to the CTV. All calculations were performed using adaptive convolve (AC) having a calculation grid spacing of 0.25 cm. In order to make fair comparisons, no modification was done throughout the optimization to the dose-volume constraints and weighting.

GI is defined as the ratio of volume covered by at least a given percentage of the prescription dose.35 Mathematically, GI in this study is expressed in (2) as:

where, V50 is the volume covered by the at least 50% of the prescription dose. A value closer to unity embodies a faster dose fall-off in normal tissue, which may indicate a lower dose to critical structure.

TABLE 1: Dosimetric results for PTV for all collimator angles. 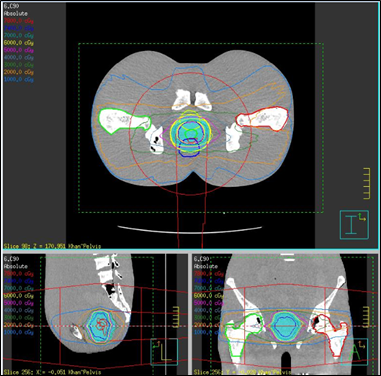 Average accumulated DVHs of the PTV, rectum, bladder and femoral heads are shown in Figures 2-4, which are planned using VMAT with different collimator angles. The planning dose objectives of the rectum and bladder agree well with the prescribed dose; their mean, maximum, D30% and D50% doses are shown in Table 2. V14% and V38% were chosen since they have been used as physics quality assurance evaluation criteria at the Princess Margaret cancer center. V30% and V38% were calculated for rectum as well as for bladder and are shown in Table 2. The dose to the femoral heads was found to be within the acceptable range; their mean, maximum, D5%, V14% and V22% are calculated and shown in Table 2. 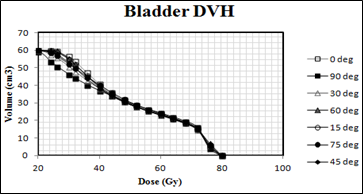 FIG. 3(a): Average dose-volume histogram of the bladder. 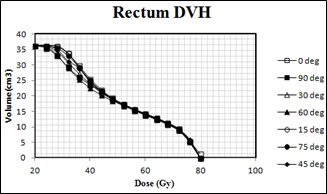 FIG. 3(b): Average dose-volume histogram of the rectum. 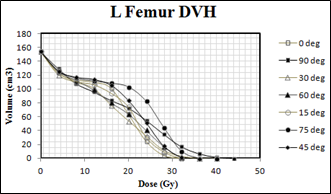 FIG. 4(b): Average dose-volume histogram of the right femur. 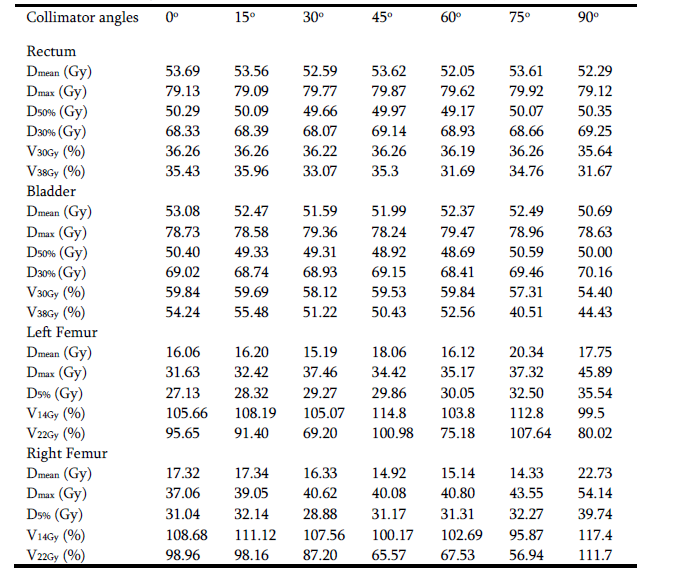 For non-single arc prostate VMAT, Rana et al.39 found that it is feasible to use a partial arc technique in a RapidArc prostate plan. They showed that for the same PTV coverage and plan optimization parameters, the partial arc technique delivered a higher dose to the femoral heads but lower doses to the rectum, bladder, and penile bulb when compared to the single arc technique. On the other hand, Sze et al.40 reported that double arc technique could produce a better plan with improved PTV coverage and reduced treatment time compared to intensity modulated radiation therapy. They found that though the single arc technique resulted in a higher rectal dose, the technique had higher efficiency than the double arc. For a busy treatment unit demanding high patient throughput, single arc technique could be an acceptable option for simple prostate cases. However, for complex cases involving lymph doses, more than one single full arc may be required. It is worthwhile to study the collimator angle effect on different photon arc techniques in prostate VMAT. This is the future work in this study.

Authors are thankful to the Higher Education Commission (HEC), Pakistan for providing a scholarship for Mr. Muhammad Isa khan. The Authors would also like to thank Daniel Markel, Medical Physics Unit, McGill University for the English edition.