Conference Proceeding
[Presented at the Young Investigator’s Symposium at the 2014 Annual Meeting of Southwest Chapter of American Association of Physicists in Medicine (AAPM) in San Antonio, Texas, USA]

Purpose: To validate the use of the 16 cm CTDI phantom to estimate the 32 cm phantom CTDIw with tabulated data from previous years.

Results: The most accurate results were obtained when using the average ratios of all the previous years, -2% to 3% difference across all scanner models. For the ratios of the year after the acceptance test, the difference ranged from -3% to 7%, while the data estimated from the acceptance testing results yielded the largest percent difference -4% to 8%. The 64-detector row system estimates displayed the greatest variation, followed by the 16-detector row scanners, while the 6-detector row system estimates were the most accurate.

Conclusion: Compared to the Siemens and GE specified CTDI limits of ± 15-30% , the variation in the estimated 32 cm phantom CTDIw values was 2-15 times lower, dependent on the scanner model and method of estimation. The variation was considerably less (2-3%) with ratios of all the previous years, perhaps indicative of year to year variations that can result in greater error.

Note: CT dose measurements from annual testing reports of four 6-detector row (6a-d), five 16-detector row (16a-e), one 32-detector row (32a) and five 64-detector (64a-e) row scanners were used to derive correction factors in the form of ratios of CTDI100 (normalized to mAs for the same kVp) of the 16 cm : 32 cm CTDI phantoms. The ratios were used to estimate the 32 cm phantom CTDIw for all of the subsequent years in three ways: using acceptance testing ratios, using the ratios from the year after acceptance testing, using the average ratios for the previous years (i.e., for 2012 data, the average ratios from 2007-2011 were used). 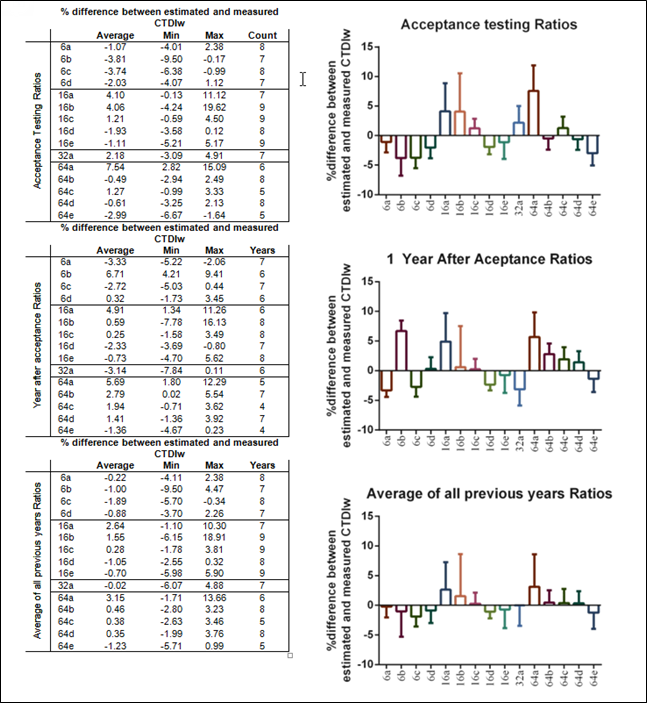