Methods: For this work 18 patients were taken for which both 3DCRT and IMRT plans with varying number of beams were planned using Anisotropic Analytical Algorithm (AAA) in Eclipse 10 Version Treatment Planning System with two to nine beams and five to nine beams, respectively. The plans were analyzed on the basis of conformity index and dose to the critical structures.

The discipline of Radiation Oncology is growing with continued advancements in imaging technique, treatment planning and delivery technique to achieve precise and accurate treatment. The advancements in the treatment delivery results in Three Dimensional Conformal Radiation Therapy (3DCRT), Intensity Modulated Radiation Therapy (IMRT), dynamic targeting Image Guided Radiation Therapy (IGRT) and dynamic adaptive radiation therapy in which IMRT and IGRT involves high dose gradients within few mm.1-4 The major goal of radiation therapy is the delivery of prescribed dose as accurately as possible to tumor region while minimizing the dose to the neighboring normal tissues.

A good treatment planning requires the following criteria such as (a) dose distribution within the tumor volume be reasonably uniform (b) maximum dose to the tissues in beam direction should not be excessive (c) normal critical structures in the beam should not receive doses near or beyond tolerance. The above mentioned criteria can be achieved by combining two or more fields. In advanced treatment planning modalities such as 3DCRT and IMRT to get better conformity and dose homogeneity, more number of fields are used. In 3DCRT the maximum number of fields used is two to six and in IMRT the maximum number of fields used is about nine to achieve acceptable results. The use of multiple fields reduces large dose regions considerably but increases the low dose regions. 5-10

For this work about 18 patients of different clinical diagnostic sites like head and neck, chest and pelvic regions were taken. This study included the cases of 5 hypopharynx cancer, 5 lung cancer, 4 endometrial cancer and 4 prostate cancer. All the patients were immobilized using aquaplast mask immobilization system. Patients were positioned on a wide bore Siemens computed tomography (CT) simulator flat couch with the help of lasers. Furthermore, radio opaque markers were placed during the immobilization procedure to guide the isocenter shift. For all the patients, CT scan images of slice thickness 2 mm were obtained. After CT simulation, DICOM images were transferred to Eclipse treatment planning system (version 10.0; Varian Medical Systems, Palo Alto, California, USA). Planning target volumes (PTV) and Organs at Risk (OAR) were delineated on the axial CT slices.

For head and neck patients, PTV, spinal cord, brainstem, left and right parotids and mandible were contoured. For lung cases, PTV, spinal cord, heart and contralateral Lung were delineated. In the case of endometrial cancer, PTV, bladder, rectum, bowels and femoral heads were contoured. In prostate cancer, gross target volume (GTV) (only prostate), CTV (GTV + 1 cm + seminal vesicle), PTV (CTV + 1 cm), bladder, rectum and femoral heads were contoured. For treatment planning, 6 MV and 15 MV X-rays from Clinac DMX (Varian Medical Systems, Palo Alto, California, USA ) integrated with 120 leaves millennium multi leaf collimator was used. For all the patients, both the 3DCRT and IMRT plans were performed in Eclipse treatment planning system of version 10 and the dose distribution was calculated using Analytical Anisotropic Algorithm (AAA) with grid size set to 1.25 mm. All IMRT plans were done using 6 MV X-rays while for 3DCRT plans; the energy selection was dependent on the depth. For example, for depths greater than 12 cm, 15 MV X-rays were used. Eclipse uses helios for IMRT optimization. Eclipse version 10 is 2 to ten times faster than its previous versions. In this work, the low dose volume regions were analyzed in four different studies. Firstly 3DCRT and IMRT plans with 2 fields to 9 fields and 5 fields to 9 fields were studied respectively.

The plans were analyzed on the basis of conformity index and dose to the critical structures. The conformity index is defined as the ratio of the volume of target volume receiving 95% of the prescribed dose to the total volume of the target volume. The plan which gives the better conformity while giving minimal dose to critical structures in both 3DCRT and IMRT is selected and taken for the first study. In this work, we have not compared the results between different energies because the low dose volume for higher energy beams is same as that of the lower energy beams. This is because of the fact that the reduction in dose due to buildup in higher energy fields is compensated by the higher exit dose and larger field boundary margins.

For the other analysis the plans which were formed with different number of beams were used.

FIG. 1: Illustration of beam placement for a 3DCRT (left) and IMRT (right) plan for a lung case. It is clear that the beams are placed so as to avoid the contralateral lung. 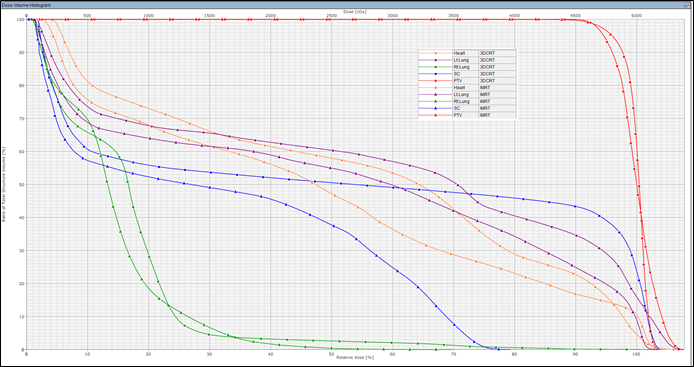 FIG. 2: Illustration of the dose-volume histogram obtained for a lung case for 3DCRT and IMRT with beam orientation as shown in the Figure 1.

3DCRT plans were done for the delineated target volume and the best plan with highest dose coverage with minimal dose to adjacent normal tissues was selected for this study. For pelvic cases, box field plans seem to give better coverage while bilateral fields achieve the set goal for head and neck cases. For chest regions, similarly a plan which gives the better therapeutic ratio is selected. IMRT plans were also done for the same set of patients. The above mentioned criterion of higher conformity index with lesser dose to normal structures was selected.

FIG. 4: Shows illustration of a head and neck case.

Clearly it is evident from the graph that for head and neck regions, the low dose level regions were higher in IMRT than in the 3DCRT Plans.

The effect observed in chest region is similar to that of the head and neck regions with slight variations.

The 5Gy volume was high in IMRT while the others were lesser.

FIG. 7: Illustrates a pelvic case which is similar to previous graphs.

In pelvic cases a different effect was observed as compared to the effect in cases of head and neck and lung region. Only the 5 Gy volume regions was high in IMRT plans while 10 Gy, 15 Gy and 20 Gy volumes were high in 3DCRT plans. 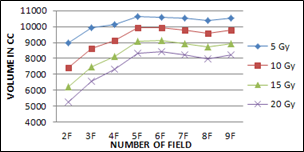 The low dose volume regions seem to increase and then saturate at five fields after which it remains almost the same.

FIG. 9: Shows the illustration of a lung case where the low dose regions increases and then saturates.

The sudden dip in the graph was because when parallel opposing fields were used the low dose regions were less as the doses add up.

FIG. 10: Shows the illustration of a pelvic case, here the same effect as seen in lung case is observed.

The dips in graph were seen in plans with parallel opposing fields.

In this study, the above analysis is repeated but for IMRT plans. IMRT plans with five to nine number of fields were done and graphs were plotted as before. 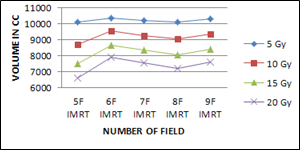 FIG. 11: Shows the illustration of a head and neck case.

As the number of fields increases the low dose volume regions increased and then remained almost the same.

This graph shows the same behavior as the previous graph. 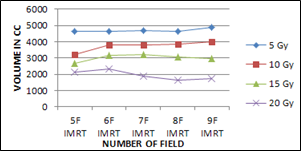 FIG. 13: This graph is an illustration of a pelvic case.

The same effect seen in the previous two graphs are observed in this graph also. So immaterial of whether it is head and neck or lung case or pelvic case as the number of fields increases there was a slight increase in the low dose volume regions and then remains almost the same. 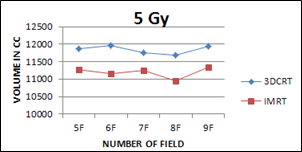 FIG. 14: Shows the 5 Gy volume regions for pelvic case in both 3DCRT and IMRT 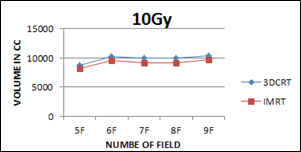 FIG. 15: Shows the 10 Gy volume regions for pelvic case in both 3DCRT and IMRT 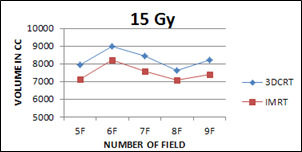 FIG. 16: Shows the 15 Gy volume regions for pelvic case in both 3DCRT and IMRT

FIG. 17: Shows the 20 Gy volume regions for pelvic case in both 3DCRT and IMRT.

FIG. 18: The above figure is representative of the graphs obtained in this study. Left figure shows the 3DCRT dose distribution levels while the right represents that of the IMRT.

The above behavior which was observed in pelvic case was seen in all head and neck and lung cases. It is clearly evident that the low dose volume regions are certainly higher in 3DCRT plans than the IMRT plans with the same number of fields.

The same study can be extended to higher modalities like dynamic arc treatments (VMAT) etc. Many studies are already going on persisting to this project. In VMAT the degree of freedom to deliver the desired dose to the target is higher as the gantry rotates around the target while simultaneously changing dose rate and field shapes. This causes many controversial views some proving that in spite of multiple beam angles the low dose volumes can be minimized by proper optimization. Still many research works are necessary to substantiate the low dose volume regions in dynamic treatment deliveries.13-17

Low dose regions are very high risk regions in the radiotherapy treatment. The incidence of secondary cancer risk increases because of the unnecessary small doses.11 However, it cannot be avoided completely but careful planning is essential to minimize these low dose volume regions. With newer technologies the possibility to treat the target from different orientations are possible which could lead to higher regions of low dose levels. This study is aimed in analyzing these low dose volume regions.

From Study 1, it is clear that in IMRT the low dose volume regions are higher than that in 3DCRT. From study 2 and study 3 it is seen that immaterial of the modality as the number of fields increases the low dose volume regions increases and then saturates. From study 4 it is evident with the same number of fields the low dose regions are higher in 3DCRT than the IMRT plans. From these analysis, it is clear that in every modality depending on the fields the low dose regions could be higher. So bearing this in mind, planning should be done to achieve the best optimized plan.

Since we have Eclipse 10 version treatment planning system with PBC and AAA algorithm only, we have performed this study using AAA. Nowadays, advanced algorithm such as Acuros XB is available for dose calculations, and such advanced algorithm could predict more accurate dose than the algorithms of previous generations.18-21 We would like to suggest the readers to investigate the impact of the advanced dose calculation algorithms on the low-dose volumes in the plans created by IMRT and 3DCRT.