An 11-year-old pre-menarche girl presented with rapidly enlarging right breast lump for three months. There was history of mild pain in the breasts. There was no history of trauma, nipple discharge, fever, anorexia, or weight loss. On local examination there was a slightly tender, huge, well-circumscribed mass in the right breast which was firm in consistency. The overlying skin was tense and shiny with prominent superficial veins without ulceration. There was no discharge from the nipple. The right breast lump measured 16 x 13 cm. The lumps were not fixed to underlying structures. Axillary lymphadenopathy was absent. Routine blood examinations were within normal limits. Chest-X ray was normal. Ultrasonography of breast showed heterogeneous parenchymal pattern suggestive of fibroadenoma. Fine-needle aspiration cytology (FNAC) of breast lumps showed cellular smears comprising of many branching monolayer sheets along with myoepithelial cells (Figure 1). Based on the cytological findings, diagnosis of benign proliferative lesion without atypia suggestive of fibroadenomas was made. 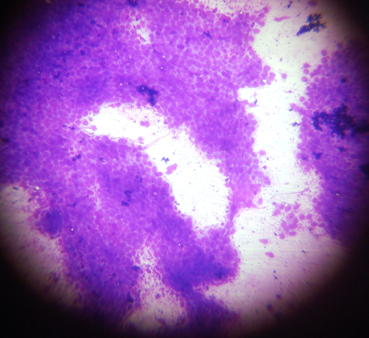 Total excision of right breast lump was done and the normal breast tissue, nipple, and areola were preserved. The resected specimen was sent for histopathological study in the department of pathology. The right-sided excised lump measured 16 x 13 x 7.5 cm and it weighed 600 gm. External surface was bosselated, and the lumps were well circumscribed and encapsulated.

Hematoxylin- and eosin-stained sections revealed well-encapsulated tumors with hyperplasia of both epithelial and stromal components. Epithelial component showed tubular or tufted pattern of epithelial hyperplasia with characteristic tufts of cells protruding into the lumina. The glands were lined by bilayered epithelium at places showing stratification. Most of the areas in both the tumors showed a pericanalicular pattern of fibroadenoma. There was no leaf-like growth pattern and cytological atypia despite of stromal cellularity. The final histopathological diagnosis of giant juvenile fibroadenomas of right breast was reported (Figure 2). The patient is on regular follow up and doing well at nine months follow up. 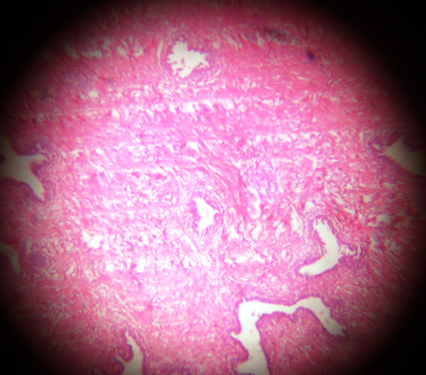 Giant fibroadenoma may be adult type or juvenile type.6 Diagnostic criteria for juvenile fibroadenoma are (1) circumscribed and rarely multiple; (2) biphasic stromal and epithelial process in which pericanalicular pattern is most common and lacks leaf-like growth pattern in uniformly hyper cellular stroma. Fibrotic areas may be present; (3) lack of atypical features in stroma-like periductal increase in cellularity, stromal overgrowth, cytological atypia, and mitotic rate >3/hpf; (4) frequent epithelial and myoepithelial hyperplasia; (5) most patients' age is 10-20 years with a mean age of 15 years. Juvenile fibroadenomas may be multiple.4

The exact etiology of giant juvenile fibroadenoma is not clear. Fluctuation of estrogen hormonal may affect the enormous growth of breast fibroadenoma.6 Other suggested etiology may be an end-organ hypersensitivity to normal levels of gonadal hormones.1

Giant juvenile fibroadenoma has to be differentiated from cystosarcoma phyllodes which have a benign and malignant form. It is important to differentiate the two pathologies before operation as they have a different treatment approach and different follow up. Benign low-grade phyllodes tumor occurs in the older (> 40 years) age group and has no racial predisposition. Generally, they present as a solitary mass confined to unilateral breast, and bilateral involvement is rarely seen. It is treated by wide excision with a margin of normal tissue or mastectomy.6, 7 In children, both conditions usually appear as well-circumscribed, hypoechoic masses at sonography and show diffuse enhancement except for non-enhancing septations at magnetic resonance imaging.

Although malignant tumors of the breast are rare in early age group, two per cent of all primary malignant breast lesions can occur in women under the age of 25 years.8 Giant juvenile fibroadenoma should also be differentiated from a few other conditions like virginal hypertrophy, breast lipoma, breast hamartoma, breast abscess, huge breast cyst, adenocarcinoma, and pseudoangiomatous stomal hyperplasia.

In juvenile breast hypertrophy affect adolescent female and can result in rapid and distressing asymmetrical enlargement of one or both breasts. Histological examination shows abundant connective tissue and duct proliferation, frequently with epithelial hyperplasia. It is treated by reduction mammoplasty.6, 9 Giant lipoma can cause soft, mobile mass in unilateral breast. Histopathology reveals encapsulated nodules of mature adipose tissue.6, 9

Breast abscesses can cause sudden and rapid growth in the breast with pain and redness. Histological examination usually shows focal collection of polymorphs with necrotic material in the lobules. Hamartomas can also result in breast enlargement and histologically reveals an admixture of ducts, lobules, fibrous stroma, and adipose tissue in varying proportions. Pseudoangiomatous stromal hyperplasia of breast reveals on histopathologically a complex inter anastomosing spaces, some of which have spindle-shaped stromal cells at their margins simulating endothelial cells.6, 9

Giant juvenile fibroadenoma is a benign tumor, and total excision of the lump with conservation of nipple and areola is considered as the best treatment.6, 7, 9, 10 Sometimes it is difficult to diagnose by FNAC.11 In our patient, the diagnosis was made clinically, substantiated by FNAC and confirmed by histopathology.9 Fortunately, majority of these tumors can be excised completely with preservation of the nipple and areola, as was done in our patient. The biologic behavior of the juvenile or cellular subtype of fibroadenomas is benign, but metachronous lesions are not uncommon.12 Giant juvenile fibroadenoma may recur after complete excision and the chance of recurrence becomes less after third decade.13

Malignant changes in juvenile fibroadenoma female beast are uncommon. Breast malignancy is always treated with surgery followed by radiation and chemotherapy. The lung is one of the major dose-limiting organs for radiotherapy within the thorax. Therefore, the total dose that can safely be delivered to patients with malignant tumors like carcinoma breast has to be controled because of the risk of radiation pneumonitis (developing 1 to 6 months after treatment) and radiation fibrosis (developing from 6 months onward). Chemotherapy (regardless of the type of drug) primarily affected the diffusion capacity. Various studies have analyzed whether and how much the course in pulmonary function changes over time, forced vital capacity [FVC], ratio of forced expiratory volume in 1second [FEV1/FVC ratio] varied between the different treatment regimens and whether recovery of early pulmonary damage occurred or not. In general, when chemotherapy and radiotherapy are combined, two different effects may occur as an interaction between both modalities, resulting in an enhancement of radiation-induced damage or an additional effect.14,15

The diagnosis and management of large breast tumors in the pre-pubertal age group is challenging for pathologist and surgeon. In the majority of the cases, these tumors are benign and should be treated with breast sparing surgery.