Purpose: The purpose of this technical study was to evaluate how the effect of changing beam energies for one to multiple fractions of a patient's plan affected the overall dose delivered to the planning target volume (PTV) and surrounding organs at risk (OAR's).

Methods: In this study, twenty-eight patient plans from treatment sites including the oesophagus, prostate, lung, spine, rectum, bladder, chest, scapula, and breast were evaluated in the Philips Pinnacle treatment planning system (TPS), of these 14 were originally planned with 15MV and 14 with 10MV. Each of these plans were substituted with a single to multiple fractions with 10MV and 15MV respectively while keeping the original monitor units the same.

Results: It was determined that when the number of fractions of the substituted beam energy remained at one fifth or less of the overall fractions a change of dose of less than 2% to the PTV could be maintained. The OAR's dose, when the plan had 20% of its fractions substituted with a different energy, were found to change by on average up to 3.5% and 2.3% for original plan energies of 15MV and 10MV respectively. The dose change calculated in the TPS was then verified using ion chamber measurements for bladder and oesophagus treatment plans.

Conclusion: Results appear to indicate that the site of treatment was not an important factor when changing energy but the overall number of fractions versus the number of fractions substituted with an alternative energy was fundamental. These results may be clinically useful when a radiotherapy department have machines with different photon energies. In the event of a break down, when a patient needs to be urgently treated, it may be possible to treat them on another machine with a different energy, without an immediate recalculation in the TPS. This decision would depend upon the percentage of fractions of their overall treatment needing to be treated before the machine was repaired.

Murray Valley Radiation Oncology Centre has two linear accelerators with different photon energies; a Varian 21iX with 6MV and 10MV photon beams and a Varian 21eX with 6MV and 15MV photon energies.1 Problems arise when patients planned with 10MV or 15MV cannot be treated due to the machine with that energy capability breaking down. As this department is in a rural setting the patients cannot be treated in another department due to the distance of travel involved.

Previous studies have compared the same treatment plan being carried out on two separate energies for the entire duration of the treatment. In one study the difference between 6MV and 18MV for treatment of lung cancer was evaluated and it was observed that there was no clinically significant difference.2 However these plans had been recalculated and optimised in the treatment planning system. It was found in another study that low energy beams provided better conformity to the target than high energy beams due to reduced lateral scatter.3

In a more recent study by Molazeda et al.4 oesophageal and pelvis plans were compared using both 6MV and 15MV where all parameters entered in the treatment planning system (TPS) such as beam angle and weighting were kept the same. It was established that there was no significant difference in uniform dose coverage to the PTV in both the oesophageal and rectum plans when the energy was changed in the TPS. However it should be noted that in the study by Molazeda et al. the plan was recomputed to find the optimal monitor unit (MU) from each angle. This differs from what is being conducted in this technical note where all parameters, including the MU's are kept the same, and the plan recomputed to find the difference to the PTV and OAR's.

The purpose of this technical study was to investigate whether a patient could have treatment between one and several fractions of their whole treatment with substituted beam energy and to quantify the difference in dose to the planning target volume (PTV) and organs at risk (OAR).

The TPS used in this study was Pinnacle (Philips Healthcare, Andover, MA) version 9.2.5 A variety of treatment plans generated using three dimensional conformal radiation therapy (3DCRT) were selected from the TPS with treatment sites including the oesophagus, prostate, lung, spine, rectum, bladder, chest, scapula and breast. Of the 28 plans selected half were planned with 15MV and half with 10MV. The number of fractions ranged from palliative treatments with 5 fractions to radical treatments with 34 fractions. In each case the energy of a single fraction was changed to 15MV if the plan was originally 10MV and 10MV if the original plan was 15MV. This was then repeated with 2, 3, 4, 5, 10 and all fractions being changed either to 15MV or 10MV. The modified treatment plan retained the same number of monitor units as the original plan. The calculation algorithm used in the TPS was collapsed cone convolution with a 0.28 cm grid size. The percentage changes to the mean dose of the PTV and OAR's were evaluated. The average PTV volume for the plans investigated is shown in Table 1.

Two bladder treatment plans were transferred onto a cylindrical phantom. The isocenter of the plans was moved to allow the ion chamber to be located within the PTV. The plan was modified so that trial 1 contained 5 fractions with 15MV and trial 2 with 4 fractions of 15MV and 1 fraction of 10MV. This second trial allowed for 20% of the treatment plan to be delivered with 10MV. The dose to the isocentres was recorded from the TPS for both trials. Both trials of the oesophagus plans were delivered to the cylindrical phantom with a Wellhofer cc13 chamber (Wellhofer Dosimetrie, Schwrazenbruck Germany)6 (with a collecting volume of 0.13 cm3 and previously known as an IC15) inserted at the centre. The ion chamber measurements were then compared with the TPS results. 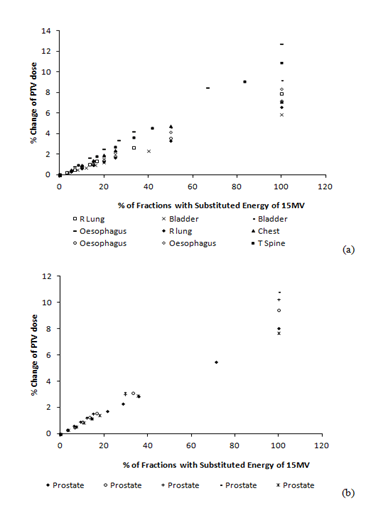 FIG. 1: A plot showing the change in the PTV dose when a percentage of the treatment was substituted with 15MV instead of the original planned 10MV for (a) three oesophagus plans, a spine plan, two bladder plans, a chest plan and two lung plans and (b) five prostate plans. 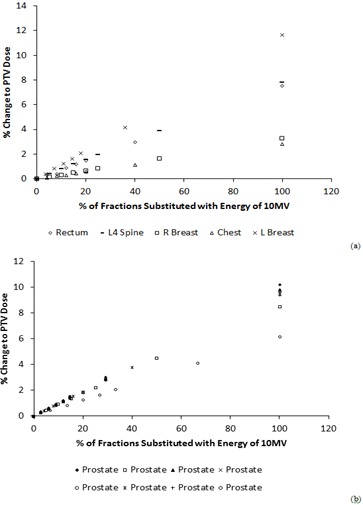 FIG. 2: A plot showing the change in the PTV dose when a percentage of the treatment was substituted with 10MV instead of the original planned 15MV for (a) a rectum plan, a spine plan, a chest plan and breast plan and (b) eight prostate plans. 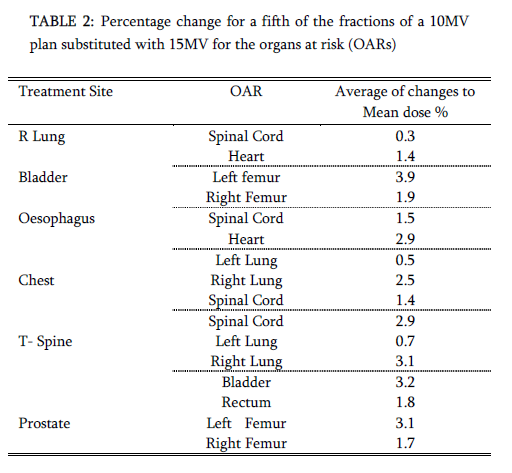 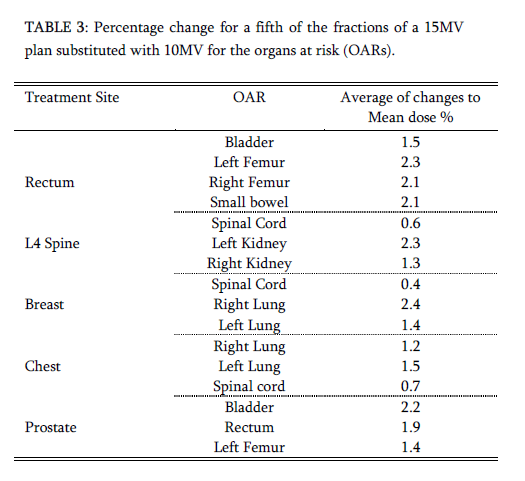 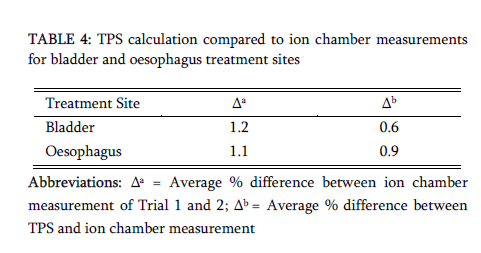 It can be seen from Figure 1 that when the 15MV beam is substituted in for a 10MV plan the change to the PTV appears to follow a linear relationship with the number of fractions substituted. A similar phenomenon was also seen in Figure 2. More importantly the majority of the plans when substituted with 15MV for 20% of the fractions have a corresponding change in dose to the PTV of <2%. This is consistent with a study by Pokharel S7 where 6MV prostate plans where substituted with mixed energy plans of 6MV and 16MV and the total dose to the PTV was found to vary by less than 1% from the original plan.

The International Commission on Radiation Units and Measurements (ICRU) recommend that the PTV dose remains within +7% and -5% of the prescription dose; therefore when considering if a plan could have one or multiple fractions with a substituted energy the dose to the PTV and the prescription dose needs to be considered.8

It was determined that up to 20% of the fractions for a 10MV or 15MV plan could be substituted with 15MV or 10MV respectively while maintaining the change to the PTV dose of less than 2%. These findings could be used as a general rule of thumb only for treatment plans generated using the 3DCRT technique in conjunction with the collapsed cone convolution algorithm and not for other techniques such as IMRT or VMAT.

Neutron dose from the 15MV beam was not considered in this study as it has previously been shown that the absolute lifetime risk of malignancies caused by secondary neutrons in a 15MV beam during intensity modulated radiation therapy (IMRT) only increased slightly compared to the risk for a 6MV IMRT treatment.9 3DCRT has only a portion of the MUs delivered during IMRT and thus considered to have even less risk than IMRT treatment plans. The results here indicate the factors which need to be considered when substituting energy in for the planned energy are the number of fractions which will have a substituted energy as a percentage of the overall treatment.

Whilst beam substitution is not the recommended approach to treat patients when they are unable to be treated with the planned energy, this technical study suggests that patient dosimetry is not greatly affected if a treatment plan of 15MV or 10MV were to be substituted with 10MV or 15MV respectively for up to a fifth of the number of fractions.