The ultimate goal of radiation therapy is to deliver a prescribed dose to a tumor precisely while minimizing dose to the critical structures. Radiation dose is the core of the regime, which also includes dose calculation and delivery of radiation beam. The former is the key component of a treatment planning system. Its accuracy directly impacts the quality of a treatment while its speed heavily affects the clinical flow. This review is focused on photon beam dose calculation algorithms, although some basic concepts can also be applied to other beam modalities.

Why is dose calculation required in radiation therapy? One of the reasons is that we need to plan and simulate the treatment prior to the actual delivery of radiation beam to the tumor. To kill a tumor with radiation, a specific dose needs to be absorbed by the tumor. To make sure this tumor gets the prescribed dose, we need to perform dose calculation by managing radiation beams which are characterized by various parameters in the treatment machine used to deliver the radiation. This process is called treatment planning. In modern radiation therapy, treatment planning is generally performed with computing software by using the patient's images to identify and locate the anatomical structures and the machine parameters to simulate the actual treatment. The result of simulation gives the calculated doses for the target as well as for other regions of interest. The accuracy of dose calculation and the strict quality assurance program is essential in order to make sure that dose delivery to the tumor is 100% or close to 100% of the calculated dose.

Radiation dose is defined as the total amount of ionizing radiation energy absorbed by the material or tissues per unit of mass. Hence, dose calculation is computing the energy absorbed by the media at any points that radiation beam particles pass or may not pass through, where various physical processes are underway due to the interaction between beam particles and the media. At any point of interest, the dose is contributed by primary beam particles interacting at the point, then scattering from other interacting points in the patient, and the non-primary beam particles leaking from the gantry head. A good dose calculation algorithm is the one that not only can take into account accurately all the physical processes involved in the beam particle-media interaction so that the calculated dose is accurate, but also is fast enough to be used in clinic. Hence, accuracy and speed are the two key factors for a dose calculation algorithm.

Correction-based algorithm is a type of empirical dose calculation which interpolates or extrapolates dose from some basic measurements in water such as percentage depth dose (PDD) for different field sizes at a certain source surface distance (SSD). The introduction of concepts of tissue-air ratio (TAR)1, tissue-phantom ratio (TPR)2, and tissue-maximum ratio (TMR)3 made this algorithm rather successful in the regime of homogenous media. A typical example of this algorithm is Clarkson's technique4 and IRREG5-6 that are still commonly used in clinic for manual dose calculation and in some commercial software used for second-hand dose check (RadCalc, Lifeline Software Inc., Austin, Texas, USA). For homogenous media, such as water, this calculation algorithm gives rather accurate results. For a heterogeneous system such as a human body with bones and lungs, applying equivalent beam path length can correct part of the heterogeneous effect, but the accuracy is not enough because it cannot take into account the lateral scattering when beam transports in media. 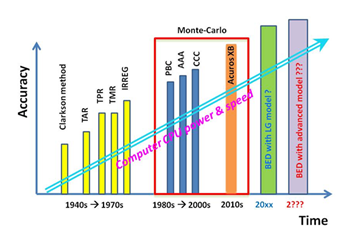 Model-based algorithm starts from physics principles and then simplifying the procedure describing the actual physical transport to expedite the calculation. These physical processes have been well studied and are unambiguous: A beam particle interacts with media at a point, releases energy, and then is deposited or scattered away from the primary interaction site. During this process it may create secondary photons and electrons, releasing energy in the scattering path. These physical processes are simplified by using a convolution equation that convolutes the primary photon energy fluence (terma- total energy released in unit of mass) with a kernel that describes the contribution from scattering photons and electrons, and the method is called the convolution algorithm.7-20 If the path length is replaced by radiological path length to describe the inhomogeneity of media, the method is called convolution-superposition. The details of how to handle this convolution kernel give rise to sub-difference algorithms that are applied in different commercial treatment plan systems: Pencil Beam Convolution (PBC)12-14, the Analytical Anisotropic Algorithm (AAA)15,18 (Varian Medical System, Inc. Palo Alto, CA, USA ), and Collapse Cone Convolution (CCC) algorithms16, 19, 20 (Pinnacle, CMS XiO, etc). For homogeneous media such as water, there is not much difference in accuracy for these calculation algorithms. For heterogeneous media, radiological path length is used in place of the actual length to account for the difference in electron density from water, and convolution evolutes to convolution-superposition. The difference in the accuracy of dose calculation on heterogeneous media is determined by how well the kernels of these algorithms can simulate the actual scattering. In PBC, the lateral scattering is considered to be homogeneous, and the inhomogeneity correction only happens in the longitudinal direction which is accounted for by using the equivalent path length converted from mass attenuation (hence the electron density of media).

For AAA and CCC, both consider the heterogeneous effect not only in the longitudinal direction, but also in the lateral one. AAA uses Gaussian functions to describe the mean heterogeneous effect in four lateral directions (+/-x and +/-y).15, 18 In CCC, the kernel is replaced by a certain number of discrete elements and the mean for all elements is used to simplify and reduce the calculation time.16, 19, 20 Many research results imply that CCC is more accurate than AAA when an inhomogeneity correction needs to be applied21-23, which indicates that CCC handles the lateral scattering better than does AAA in a heterogeneous environment. Monte-Carlo algorithm is not a new technique but has been used as a benchmark to check the accuracy of other dose calculation algorithms.22, 24-28 Starting from the first principles of physics, Monte-Carlo simulates the actual physical processes in two major steps which are initiated by a random number seed generation in the target: (1) the radiation beams travel through the accelerator gantry head including the collimator system; (2) collimated beam particles from the gantry head travel through and distribute dose in the patient's body. As Monte-Carlo simulates all the real physical processes in which the beam particles are involved during transportation, the result of its dose calculation should be very accurate.

Similar to Monte-Carlo algorithm, Acuros XB tries to simulate all the physical processes that beam particles involve- instead of generating beam particles one by one in the simulation process, Acuros XB uses a group of Boltzmann transport equations (BTE) to describe all the physical processes involved31, and these equations are solved using numerical methods in the computer world, which is much faster than Monte-Carlo (and even the AAA algorithm) but still provides a comparable accuracy to the Monte-Carlo algorithm. The Acuros XB algorithm was recently implemented in the Varian Eclipse Version 10.1, and is available in clinic.32-34

To test and evaluate the accuracy of a dose calculation algorithm, the best approach is to perform measurements and then compare the measured results with the calculated dose in both homogeneous and heterogeneous media. Many works have been done to evaluate the above-mentioned dose calculation algorithms21-23, 30, 32-42, and the hierarchy of accuracy is as follows: Monte-Carlo algorithm > Acuros XB > CCC > AAA > PBC > Correction-based methods.21-23, 30, 32-42 With Monte-Carlo and Acuros XB algorithms, you can expect a close to 100% accuracy of dose calculation if time permits.

After more than 60 years of dedicated efforts on the dose calculation algorithm and the development of powerful computer CPUs, the accuracy of dose calculation seems to meet our requirements, and the time needed for calculation in the clinic no longer matters. Are Monte-Carlo and Acuros XB algorithms the end of the dose calculation game? We should not forget that the ultimate goal of radiation therapy is to kill cancer cells while sparing normal tissues as much as possible. A pure physical dose in non-life media, which does not directly associate with any biological factor in tissues, has no more significance than does a dose calculation algorithm with less accuracy. The next generation of dose calculation algorithms should and is expected to include biological equivalent dose or biological effectiveness dose, which can take into account the actual biological effect for different types of ionization radiation beams and different types of irradiated tissues, and can allow physicians to relate the biological dose more closely to the treatment outcome than what we have today. This is heavily reliant on the progress of radiation biology. Is that going to be a simply biological equivalent dose (BED) with Linear-Quadratic model or BED with a more advanced model?