Conference Proceedings
(Presented at the Conference on the Physics, Chemistry and Biology of the Water. Bulgaria, October 22-25, 2013. http://www.waterconf.org/)

Laser photobiomodulation (LPBM) has been proposed as a multi-target (multi-hallmark) therapy for cancer and other complex diseases based on an approach that aims to substitute and/or complement metabolic energy pathways through oxygen-dependent (e.g., cytochrome c oxidase (CcO)) and/or oxygen-independent (e.g., light-water interactions (e.g., F0-F1 motors)) mechanisms with critical signaling pathways in primarily aqueous media. Cellular and molecular bases for water-mediated, long-range, energy supplementation aimed at inducing and modulating physiologically reparative processes, including apoptosis, have been previously presented through a mechanism termed Photo Infrared Pulsed Biomodulation (PIPBM). Water's role as an oscillator in LPBM has also been documented. These ideas were recently complemented by integrating the role of the quasi-crystalline exclusion zone (EZ) described by Pollack as the fourth phase of water. This is retrospective analysis of experimental and clinical data using an infrared pulsed laser device (IPLD). It found photo-induced effects over the water dynamics of burned rat tissue monitored by 1H-NMR transverse relaxation times (1/T2), indicating significantly greater structuring of water. In addition, a microdensitometry study of T2 weighted tumor heterogeneities from a phase I clinical trial of the IPLD in patients with advanced neoplasias and an algorithm for tumor characterization indicated significantly increased structuring of water, possibly proving a photobiomodulation effect over the EZ associated with histologically-confirmed selective photo-induced tumor cell death. To the best of our knowledge, this is the first clinical demonstration of light-induced effects over the EZ. It supports our premise that LPBM can increase potential energy in the EZ, which then acts as a rechargeable electrolytic bio-battery for the external selective supplementation of the energy demand required for cellular work, signaling pathways and gene expression in the presence of injury-induced redox potentials. It further suggests that EZ structuring may be used as a predicator of anticancer response before measurable tumor volume reduction.

My interest in light-water interactions and their application to cancer started thirty years ago. While training on laser medicine, I saw a simple demonstration that had a big impact on me. A high-power carbon dioxide laser was aimed with small a Helium-Neon laser at a droplet of water on the skin of a red apple. A brief pulse of light was fired, and the water vaporized. But to my surprise, the skin of the apple remained completely intact. I had been reading about studies using low-energy lasers to induce non-thermal photochemical effects.1-4 So this experience led me to ponder about how selective light absorption by water might be used to target, non-thermally and non-invasively, advanced systemic cancer and other complex diseases.5

A major obstacle for cancer drugs aiming at single molecular targets to minimize nonspecific toxicity has been that clinical response is often transitory and followed by relapse.6 Therefore, and, given that the acquisition of new-generation cancer hallmarks is linked and made possible by the tumor microenvironment, it has been proposed that new cancer therapies should not aim solely at killing tumor cells, but at re-establishing homeostasis / homeo-kinesis, a micro- environment effect which, as we will discuss today, may be induced by light water interactions.7-8

Light can stimulate or inhibit (that is, modulate) cell function depending on signal and receptor characteristics, which determine biological outcome. Laser photobiomodulation uses monochromatic or quasi-monochromatic low-fluence light to induce biochemical, metabolic, biomechanical and hydrodynamic effects that can control cellular and tissue energy (namely, ATP, GTP and other high-energy molecules) and receptors purine and adenine.5,9-10 One conduit includes absorption by cytochrome c oxidase (CcO), a key enzyme in the respiratory electron transport chain. Laser photobiomodulation then initiates secondary cell-signaling resulting in increased energy metabolism. Water further provides pathways for light absorption and transportation that can substitute and complement metabolic energy pathways through oxygen-dependent and oxygen-independent effects with critical signaling pathways in primarily aqueous media.5, 10 Long considered an innocuous medium, water has increasingly been found to be a key player in numerous physiologic mechanisms, including first-contact events in which cells decide between survival and apoptosis. Consequently, externally applied electromagnetic energy (light) may selectively target the organization of water to steer biological function.11

In the late 1980's and early 90's, our group completed animal testing and embarked on a phase 1 clinical trial in patients with advanced neoplasias using an infrared pulsed laser device (IPLD),12 (Figure 1) which consists of a near infrared drive force wave and an ultrasonic (US) carrier wave. The principles of the Helsinki declaration were followed and regulatory approval was obtained. Patients suffered from advanced solid tumors, including carcinomas and sarcomas, had exhausted standard treatments and had a life expectancy greater than or equal to 12 weeks.13 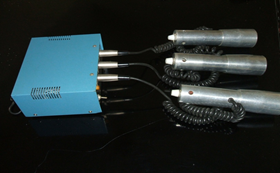 A paper published in Clinical Cancer Research demonstrated that the IPLD was clinically safe and improved performance status and quality of life.13 Antitumor activity was found in 88.23% of patients with more than 10 years of follow-up. Previously, Clinical Experimental Immunology published significant immune modulation of CD4, CD45RA+, CD25, TNF-α, and soluble IL-2 receptor (sIL-2R).14 An article in Lasers in Surgery and Medicine showed selective activation of programmed cellular death (that is, apoptosis, necrosis, anoikis) and associated cytomorphologic changes in neoplastic cells, but not in peripheral tissues.15 (Figure 2 ) 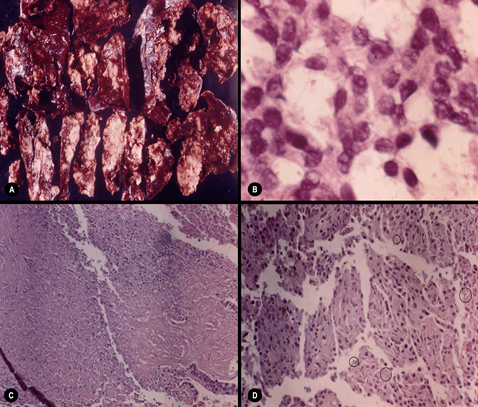 T2-weighted micro densitometry results appearing in the same journal showed increased water content in tumor heterogeneities before tumor-volume reduction and therapeutic anticancer effect, showing that changes in water acted as predicator of tumor response16, as illustrated by this figure from a patient with a chondrosarcoma of the posterior fossa. (Figure 3) 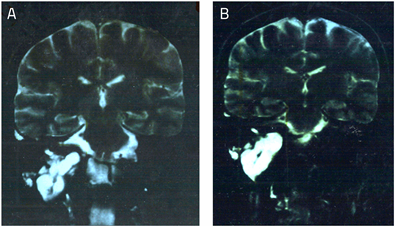 FIG. 3: MRIs from patient with chondrosarcoma of the posterior fossa. A. Pre-IPLD treatment MRI. B. Post-IPLD treatment MRI show unchanged tumor size with a stronger T2-weighted tumor signal as evaluated by microdensitometry, indicative of a significant change in the tumor's apparent diffusion coefficient (ADC) of water.

Over the last decade, we have strived to document the structural, kinetic, and thermodynamic implications of our findings. Along the way, we have proposed detailed mechanisms that explain one basic premise: that external electromagnetic energy supplementation can enhance and even substitute for endogenous ATP production to power and modulate physiologically reparative mechanisms which can help reestablish homeostasis / homeokinesis, even when physiologic metabolic pathways have been compromised.17-18

Cellular and molecular basis for water-mediated, long-range, energy supplementation aimed at inducing and modulating physiologically reparative processes, including apoptosis, have been described as part of a mechanism called Photo Infrared Pulsed Biomodulation.5 The role of water as an oscillator in near infrared laser photobiomodulation has also been documented, adding to a more coherent description of the central effects of NIR light over redox centers and key transmembrane enzymes, such as CcO.10

Recently, these ideas have been complemented and expanded by integrating the role of the quasi-crystalline exclusion zone described by Pollack as the fourth phase of water.11 We hypothesized that the exclusion zone might be targeted by laser photobiomodulation as an energy reservoir, which cells may use to fuel cellular work and trigger signaling pathways and gene expression in the presence of injury-induced redox potentials. Nevertheless, we stressed that experimental proof that laser photobiomodulation would express effects via the exclusion zone in a high-order biological system had not been attained.19

Using a 90MHz nuclear magnetic resonance spectrometer, we found that the IPLD induced significant short-term molecular changes in burned rat soft tissue. An unpaired t-test was used to analyze observed differences in mean T2 values and their reciprocals. After 48 hours, there was a statistically significant difference in 1 over T2 values for irradiated specimens versus non-irradiated specimens and the control group.20 An ANOVA I performed on 1 over T2 values as a function of time also showed a highly significant tendency to decrease only for irradiated specimens.20 The correlation time of the same group of rats was also significant in a range consistent with membrane effects attributable to energy transport to biopolymers and increased synthesis.21

Taken together, these experimental results are indicative of a large post-treatment entropy decrease, increased water structuring and enhanced physiologically reparative effects. This is consistent with clinical data from the microdensitometry study of patients with advanced neoplasm treated with the IPLD in the referred phase 1 trial. In that study, pre- and post-IPLD treatment T2 weighted MRIs were digitized using a Perkin-Elmer microdensitometer with a resolution of 50 micra per pixel. The field of view was 150 by 150 mm and the matrix was composed of 256 by 256 pixels. A linear transformation was used to convert data to 256 intensity levels using the IBM HIPS software. Measurements were performed by an independent blinded third party and all MRIs were obtained, at most 3 days, from control cytomorphologic evaluations.15

The next slide shows the T2 weighted MRI and raw micro-densitometry image of a left-cheek metastasis of the same patient with recurrent malignant papillary meningioma. Red tones relate to high water content caused by photo-induced cell death. Blue shades correspond to active tumor areas. The wide divide partially separating the tumor is consistent with the loss of cellular adhesion due to anoikis. This can also be seen in smaller areas to the left of the image.22 (Figure 4)

Of particular interest, the light blue color around the red tones strongly suggests areas of highly ordered water. On the other hand, the bright white areas of variable width between red and light blue regions, especially around small islands of inactive tumor on the right, suggests areas of fluorescence associated with absorption of 270 nanometer light. These white areas are consistent with the presence of structured matrices, displaying marked charge separation and pH differences.22 The above fits well with the behavior of the corresponding curves obtained from an algorithm for tumor characterization by analysis of transversal relaxation rates, which show an increase in structured water associated to biopolymers and macromolecules.18

The figures show the evolution over two months of two recurrent tumor masses from the same patient before and after IPLD treatment. The top- and bottom-row graphs correspond to supra-orbital and left-cheek metastases. On each graph, the left curves represent short T2 times, which correspond to the vertical section of the T2 exponential curve, whereas the right curve corresponds to long T2 times from the horizontal section of the same curve.18 (Figure 5) 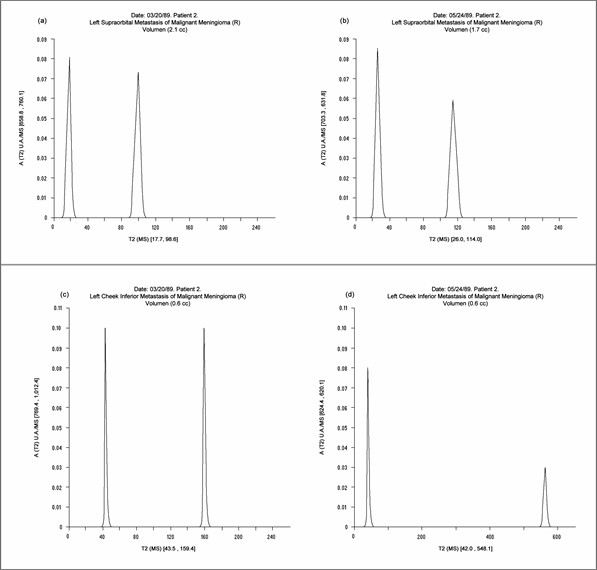 To the best of our knowledge, this may be the first clinical demonstration of light-induced effects over the exclusion zone. We conclude that, as proposed, laser photobiomodulation may increase potential energy in the exclusion zone, which can then act as a rechargeable electrolytic bio-battery for the external selective supplementation of the energy demand required for cellular work, signaling pathways and gene expression in the presence of injury-induced redox potentials. This further suggests that exclusion zone structuring may be used as a predicator of anticancer response before measurable tumor volume reduction.22