Purpose: Haemorrhagic cystitis (HC) is uncommon and in its severe form potentially life threatening complication of Haematopoietic stem cell transplantation (HSCT) in children. We present our single centre experience in the urological management of this clinically challenging condition.

Methods: Fourteen patients were diagnosed with BK-Virus HC in our centre. The mean age at diagnosis was 8.8 years (range, 3.2-18.4 years). The mean number of days post-BMT until onset of HC was 20.8 (range, 1 – 51). While all patients tested urine positive for BKV at the clinical onset of HC, only four patients had viral quantification, with viral loads ranging from 97,000 to >1 billion/ml. 8 patients had clinical HC. Ten patients experienced acute GVHD (grade I: 6 patients, grade II: 3 patients, grade 4: 1 patient).

Conclusion: There is limited available evidence for other potential therapeutic strategies highlighting the need for more research into the pathophysiology of HSCT-associated HC. Commonly used interventions with possible clinical benefit (e.g. cidofovir, ciprofloxacin) still require to be evaluated in multi-centre, high-quality studies. Potential future preventative and therapeutic options, such as modulation of conditioning, immunosuppression and engraftment, new antiviral and anti-inflammatory and less nephrotoxic agents need to be assessed.

A significant number of children undergo haematopoietic stem cell transplantation (HSCT) for a range of indications each year. There are various side effects and complications well understood, many of which occur secondary to immunosuppression. Haemorrhagic cystitis (HC) is characterised by haemorrhagic inflammation of bladder mucosa which results in painful micturi-tion associated with haematuria. The clinical course of HC following HSCT can vary from from mild and brief (Grade I) to severe, prolonged and life-threatening (Grade IV).1, 2

A common theory for the onset of HC following HSCT indicates the role of BK virus reactivation during the time of maximal post-transplant immune suppression in the pathogenesis of late-onset HC.6 We present our single centre experience in the urological (medical and surgical) management of these patients with this clinically challenging and difficult clinical diagnosis to manage.

The aim of this case series was to investigate the cases of all children who underwent HSCT and developed BK-virus HC as a complication, over a 6 year period (2004-2009) at Newcastle General Hospital (NGH). Those who developed BK-virus positive HC following HSCT (n=14) were identified. Notes for all eligible children were sourced and data retrieved on a number of variables: diagnosis necessitating HSCT, date of HSCT, conditioning regimen, donor (whether related and nature of relationship or unrelated), HLA match, Adenovirus and CMV status both pre- and post-HSCT, Graft versus Host Disease (GvHD) prophylaxis, number of days post-HSCT of onset of GvHD, grade of maximal GvHD, treatment of GvHD, number of days post-HSCT of onset of HC, grade of HC, serial BK viral loads in both urine and serum, surgical treatment of HC, medical treatment of HC, serial CD45RA+ counts and eventual outcome. Data was presented on an excel spreadsheet prior to analysis. 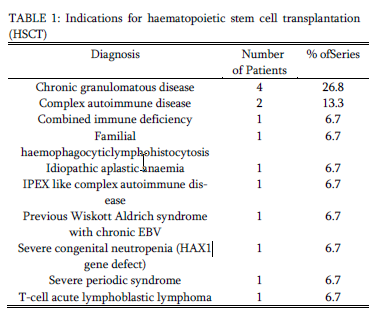 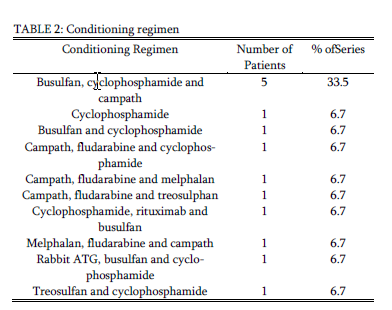 The mean age at diagnosis was 8.8 years (range 3.2-18.4 years). The mean number of days post-BMT until onset of HC was 20.8 (range 1 – 51). While all patients tested urine positive for BKV at the clinical onset of HC, only four patients had viral quantification, with viral loads ranging from 97,000 to >1 billion/ml. 8 patients had clinical HC (Table 5). Ten patients experienced acute GVHD (grade I: 6 patients, grade II: 3 patients, grade 4: 1 patient). 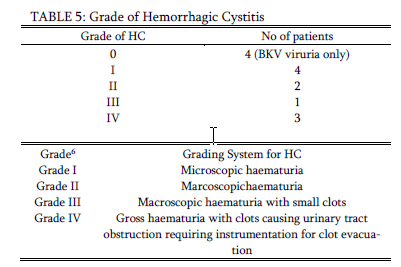 Post-engraftment HC tends to present within one month of neutrophil engraftment, resulting in variable disease severity and duration (one week to four months)7 suggesting multiple contributing risk factors. A three-phase model for post-engraftment HC has been suggested: uroepithelial insult by chemotherapy and radiation providing a permissive environment for virus replication (phase 1), reactivation secondary to immunosuppression (phase 2), and attack of infected uroepithelial cells by donor lymphoid cells upon engraftment, resulting in tissue destruction (phase 3)8. HLA and immune response gene polymorphisms are also likely to play a role in viral immune responses, as has previously been demonstrated in BK-virus nephropath.9, 10

BK-virus is a member of the Polyomaviridae family and was first described in 1971. It was isolated in cell culture from the urine of an asymptomatic immunosuppressed patient.11 Primary infection with BK-virus usually occurs in childhood and is generally asymptomatic. Thereafter, the virus lies latent in the host. BK-virus is urotheliotropic, affecting epithelia of renal calyces, renal pelvis, ureter and urinary bladder. The widespread frequency of BK-virus in children suggests common routes of transmission such as respiratory or faecalspread.6 Post HSCT HC with BK-virus is widely believed to result from reactivation of latent virus, although new or reinfection has also been postulated.9, 12-14 Urinary BK viral load can be quantified by PCR and urinary BK viral load peaks have been found to correlate with subsequent development of HC.8, 15-17 Urine BK viral loads of >9 x 106 copies/ml and blood BK viral load >1 x 103 copies/ml are predictive of HC in children, with a higher sensitivity for urine monitoring.6

Incidence of BK-virus associated HCis varied across different transplant populations, ranging from 3.6% to 20%, according to definition of HC used. A number of prospective and retrospective case series have investigated risk factors for the development of post-engraftment HC, including myeloablative conditioning,18 unrelated donor transplants,19-21 and Adenovirus and CMV infection.22-25 Demographic risk factors include male sex,23, 26 and age >10 years.27-30 GvHD is a consistent risk factor in paediatric26, 28, 31, mixed21, 30, 34, and adult20 study cohorts. Busulphan21, 34 and cyclophosphamide28, 35 conditioning which are important risk factors for pre-engraftment HC, seem also to increase risk of post-engraftment HC. Immunosuppressive therapies, including T-cell depletion, ATG, methotrexate, cyclosporin and tacrolimus all lead to a higher incidence of HC.21, 28, 29, 36-38

The management of paediatric patients with post-HSCT HC is difficult. The clinician is confronted with a condition that is potentially life threatening with significant associated morbidity. The recent toxic insult, profound immunosuppression and co-morbidities such as renal impairment severely restrict therapeutic options, however, a recent systematic review supports MESNA and hyperhydration as medical preventative measures and use of recombinant Factor VII in the emergency treatment of acute haemorrhage unresponsive to alternative interventions.6

Hyperhydration with forced diuresis has been studied in the context of pre-engraftment HC caused by the toxic metabolites of cyclophosphamide or ifosfamide. The uroprotective effect of 2-mercaptoethane sodium (MESNA) as a uroprotective antitoxic agent has been investigated as part of high-quality chemotherapy drug trials, and also with regards to efficacy, tolerability and safety compared with hyperhydration5, 39 or prophylactic bladder irrigation.40 Results are equivocal, with only one trial reporting an advantage of MESNA over forced diuresis/hyperhydration.4 MESNA and hyperhydration appear to be equally effective in preventing HC, although current studies do not distinguish between early and late onset HC, therefore the protective impact on post-engraftment, BK-virus associated HC cannot clearly be determined.6

Recombinant activated Factor VII (rFVII) has a haemostatic effect leading to formation of thrombin and a haemostatic plug. rFVII was investigated in a randomised, placebo-controlled clinical trial.41 This study enrolled 100 patients aged >12 years with bleeding complications between days 2-180 post-HSCT, 26 of whom had HC. rFVII was given in 3 different doses (40, 80 and 160 μg/kg) as seven single administrations over a 36 hour period, and compared with placebo. Overall, a reduction of the bleeding score at endpoint (38h after first administration) was observed for 80 μg/kg, but not for 160 μg/kg. Six thromboembolic events, including two deaths, were attributed to the study medication. A different dose regimen was used in a prospective case series on patients with HC after high-dose chemotherapy.42 Seven adult patients received initial doses of 80 μg/kg, followed by two further administrations of 120 μg/kg at 3-hour intervals if bleeding persisted. Four patients had a complete, and a further two had partial short lasting responses although bleeding recurred to baseline within hours. Two further small case series report doses of 100 and 400 μg/kg43 and 90 and 270 μg/kg44 to be effective in HC. As a standard rFVII dose of 90 μg/kg costs around £4000 in the UK, treatments according to the above study protocols would cost between £12,000 (for three doses) and £28,000 (for seven doses),45 thereby limiting its use to the most severe of cases.

The evidence for other medical interventions commonly used, and considered ‘conventional’ – systemic cidofovir, oestrogen, hyperbaric oxygen therapy, bladder instillation with alum, formalin or prostaglandins – have been reported to have a weak evidence base, are potentially highly toxic, or both.6

Hyperhydration was employed for three of our patients (21%) with grades II, III and IV HC. MESNA was used for one patient (7%) with grade II HC, and blood and platelet transfusion, premarin and oxybutynin was employed for another patient who also required surgical intervention with bladder irrigation.

Grade III or IV HC with blood clots often requires surgical intervention. Catheterisation with cystoscopic clot extraction may become necessary, and consideration should be given to continuous bladder irrigation with normal saline for prevention of clots and bladder tamponade, if required.6

HC can occasionally present so severe that it not only fails to respond to conservative measures, but also puts a patient’s life at risk due to uncontrollable haemorrhage or renal failure secondary to complete urinary tract obstruction. Current case litera-ture indicates cystectomy as the final step in the management of severe medically refractory HC.46 Whether a radical or sub-total cystectomy should be performed depends largely on the policy of the unit. Preservation of the bladder neck has been recommended in children because severe HC is improved by cystotomy, temporary urinary diversion and bladder packing.47 Currently, subtotal cystectomy with urethra and bladder neck preservation, allowing subsequent reconstructive continent urological surgery is the preferred option although experience is limited.6

Other surgical management options including use of fibrin glue, selective embolization, and intravesical hydrostatic pressure have been reported to have a weak evidence base or are associated with unacceptable risks.6 Catheterisation and bladder irrigation was only required for two patients (14%) in the current case series population and clot extraction for one patient (7%), indicating that the study unit is adhering to current guidelines in managing post-HSCT HC conservatively where possible, reserving invasive, surgical treatment options only in cases of grade IV HC refractive to simple treatment options.

Current guidance on management of post-HSCT HC advocates the following6:

There is limited available evidence for other potential therapeutic strategies highlighting the need for more research into the pathophysiology of HSCT-associated HC. Commonly used interventions with possible clinical benefit (e.g. cidofovir, ciproflox-acin) still require to be evaluated in multi-centre, high-quality studies. Potential future preventative and therapeutic options, such as modulation of conditioning, immunosuppression and engraftment, new antiviral and anti-inflammatory and less nephrotoxic agents need to be assessed.6